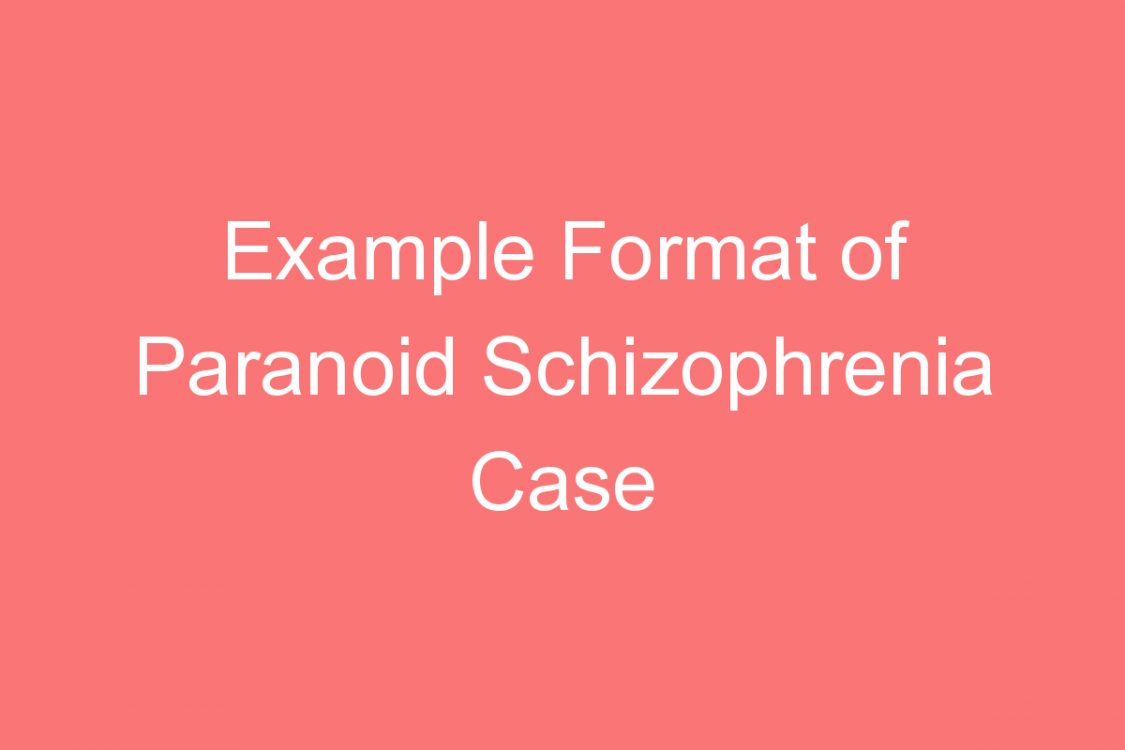 The following is an example case study of patient affected by schizophrenia. This will help Psychology and psychiatry students to prepare cases. This is just for reference only so look at the format.

Presenting complaints and their duration

Course of the illness          : Continuous illness but without periodic epizodes.

Mother’s physical health during pregnancy time is normal. Nature of birth was normal. Birth cry was present. He was born from non-consanguineous union. Birth weight and skin colour was normal. No delay of milestone was found.

Experienced sleep disturbances and temper tantrums in childhood. Relationships with peers were less.

There is no clear evidence of physical illness during childhood.

The patient has high scholastic performance. Attitude towards peers was poor.

Started career in computer hardware related job as a technician in 2004. He resigned his job in 2009. Then became a customer care executive in May, 2011 but resigned the job in August, 2011 due to high stress, Work satisfaction is low. Future ambition is to do farming.

Use and abuse of alcohol drugs

Used to smoke in 2002, when he was in plus two but stopped it. The patient sometimes used drugs to improve memory and toughness. He never consumed alcohol.

Attitude to others in social, family and sexual relationships. The relationship with father is not good. But he is very attached to his mother and sister.

He was unable to address a social situation. He is over concerned, selfish and dissatisfied with work.

He is very interested in religious activities especially in morality.

The mood swings are present from being lively to gloomy.

There are no fantasy experiences in his early life

He is unable to tolerate frustrations and situations arousing anger and anxiety.

The patient has good hygiene and cleanliness. He was cooperative, attentive and talkative. The rapport establishment was easy.

Talk: The reaction time was normal. Amount of speech was high in an aggressive pace.

Stream: There is some flight of ideas and thought blocking.
Form: Intact.
Possession: Nil
Content: Delusion of reference.

Subjective explanation of emotion was anxious.

1. Attention and concentration: Intact
2. Orientation: Good orientation about his name, identity, place, time of the day and the date.
3. Memory:  His immediate memory and long term memory is intact but recent memory is low.
4. General information:  He has a high level of general awareness.
5. Intelligence:  He has high level of intelligence as shown by his verbal capacity.
6. Judgement: Intact
7. Insight: The patient is aware of his illness and also not interested in treatment.
8. Social Judgement: Show appropriate behaviour.
9. Test Judgement: Intact.

The patient S.K, 31 years old male, unmarried, plus two passed and worked as customer care executive from middle socio-economic status with significant past history of schizophrenia of Grandfather, brother of grandfather and Father. He is characterized by decreased sleep, poor peer relationships, premorbidly submissive and have suicidal thoughts.

Model Of Case History On Intellectual Disability In NIMHANS, Banglore Model: The post is a sample case study of a client diagnosed with paranoid schizophrenia by a psychiatrist.