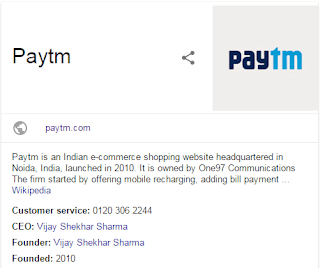 Why Paytm Cannot be Used For Vodafone Full Talktime Recharge

Paytm is an Indian E-commerce company that provides mobile recharges as well as shopping of different products such as cloths, electronic items etc. I am using Paytm for mobile recharges.I think those who use Paytm are suffering from the below issues also.

However sometime it is just crazy how much time Paytm takes to load the operator. I recharge for only one number with two different recharges – one mobile internet and one for talk time balance. The Paytm app takes insane time to load the operator. I am not sure whether it is a trick to make users scroll down the app and see what are the other offers and deals.

Read more: Think Twice Before Being An Amazon Affiliate – Account Closed Without Warning

Lack of Range of Service

I wanted to buy a product from Paytm and while checking pin number, it said that Paytm do not have service in that area. Basically they cannot ship me the product to my place. The place is just 16 KM away from Lulu Mall and 5KM away from UC college. Still they do not have service in that area. Why can’t they tie up with another courier company to provide these products and improve their range of service?

There was another issue with Vodafone recharge also. I recharged full talk time offer in Vodafone. The money from account was debited but the talk time was not credited to the mobile number. I found out this later and hence recharged again in the same number and same happened. Money was debited from account and no recharge happened. I called customer care center of Vodafone and enquired about this. The representative told me that full talk time offer of Vodafone cannot be charged through Paytm. I was like what???!!!.

Vodafone full talk time offer cannot be charged with Paytm or that’s the information I got from Customer care center. The representative told me that the money will be reimbursed in 2 days but it didn’t get reimbursed even after one week. Isn’t it the responsibility of Paytm to remove such plans from apps which cannot be used? Even the mobile provider says that such recharges will not work, then why they are listed in the app. Also it is the duty of Paytm to refund the debited money to the user account.

However Paytm is a good way to recharge without going to recharge shops and pay their commission also. You can get small deductions when coupons are applied while recharging.