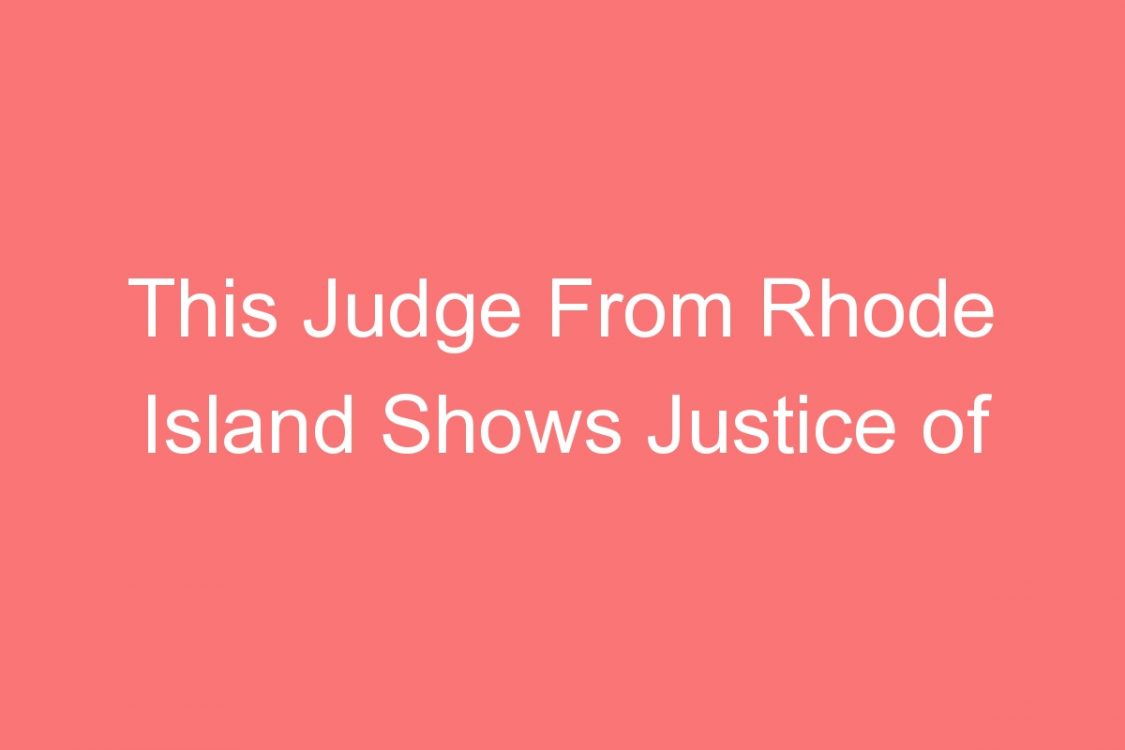 This Judge From Rhode Island Shows Justice of Peace

Law is needed in the society for the smooth functioning of it. Justice of peace comes from compassion and humanity. This judge show what is real justice of peace and considers people as humans and not just cases.

Law is fascinating and important because it deals with a variety of people such as Ministers, MP’s, MLA’s, doctors, teachers, and common people and for children too. However, most of the people are unaware about the history of law, philosophy of law, functions of the law, applications of the law etc.

Usually people say that if you want to file case check your wallet first. This may be happening to some people and this was clearly a misunderstanding. Anyone who has knowledge about law can use it in the court and file cases. This type of misunderstanding happens due to misleading information and lack of knowledge about law and court procedure. Therefore, by giving an interesting introduction to law, we can begin a journey of knowing some laws and in the future, use it in the real life.

We can define law as general standards of conduct, established and enforced to protect society and allow smooth functioning of it. In India, the law is based on Anglo-Saxon judicial system that we adopted from British Government.

There are different types of law such as Public law, Private law

Civil law – Body of law that pacts with rights, duties and responsibilities of parties of two individuals.

Common law – Law that is unwritten

Statutory law – Law that has been passed by state or central legislature.

International law – Law that has been made by treaties in global meetings by different nations. The laws are made in accordance with the international treaty.

Domestic law– Law that exist within the boundaries of the nation and can only be applied within the nation. Under domestic law there are two laws, Substantive law and Procedural law.

Substantive law – Body of law that defines general rules or principals of how one should not act in the society. Under Substantive law, there are two divisions of law. They are Public law and Private law.

Public law – Body of law that deals with rights, duties and obligations of public. This types of law is mostly used by social activists to file public litigations. Now Indian government adopted the right based framework to all the acts and bills. Public law is again classified into three law, Administrative law, Constitutional Law and Criminal law.

Constitutional Law – The basic type of law and Government gets power from this law. This law has the most power in a democratic country and no law against this law can stand-alone. If such a law exist it will be non-void or invalid.

Criminal law – Body of law that deals with criminal offences and punishments such as CRPC.

Tort law – Deals with rules and regulations of holding individuals or private establishments accountable for destruction or loss they cause to another individual because of an accident or deliberate action.

Contract law – Guide the relationship between people and businesses.

Employment law – Ensures whether workers are getting enough salary, able to adapt to work environment and fix minimum wages for work.

Procedural law – Body of law that deals with laws to administer substantive law.

Some good books you can refer to start reading about law.