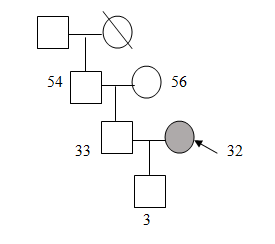 was keeping fine in her personal and professional life until 3 years ago when she met with a car accident. Since then her husband has noticed a significant decline in her memory. She cannot remember important dates like her marriage or birthdays. She cannot remember anyone’s age or mobile numbers. If introduced to a person, she may fail to recognize them after 5 minutes.

She cannot remember which thing is kept where in the house, like her cupboard or what all ingredients are required to cook a meal. She also does not know how to count money. She needs to be instructed every small detail to do a task. For an example, every morning she has to be told , clothes from her cupboard to the bathroom and instructed to apply water and soap in order for her to take a bath. If she is asked to get a glass of water, she may forget to do it in case interrupted. She has to be told to , tea etc. sometimes she forgets how much to eat or if she ate or not. She tends to become easily irritated and angered. If mother-in-law tells her to do some work she will get irritated and shout “I will not do it”.

Sometimes the patient suspicious behavior as if people are talking about her. She has had incidents of being physically aggressive to her 3 year old son. Her husband reported that at times she sits alone and mumbles something incomprehensible in Hindi and also laughs for no reason but that has reduced now. She has difficulty in falling asleep; she lies down on or keeps on sitting, roaming about the room at night. Her husband reported that she has a constant urge to urinate every few minutes. has had episodes of seizure in April and in September for which she was admitted in hospital. At that time she experienced multiple episodes (5-6) within a gap of 10-15 minutes. Her right hand got clutched and went rigid, her legs got stretched, her eyes widened and saliva came out of her lasted for a few minutes and after the episode she would say her husband – “Take me home, stay near me”. Twice patient has wandered off at night asking to go to her parents’ house.

Past Medical and Psychiatric history

The patient is undergoing treatment from neurologists in past 3 years. After the accident the patient was taken to Hospital but they refused to take the emergency case due to the severity of her injuries. From there they were taken to Hospital with left arm, cuts on and right side of her face was badly injured. She was in a state of for 1 month and was on a ventilator for 9-15 days. There she underwent tracheotomy, multiple but superficial stitches on her forehead and plastic surgery on her right cheek and then was transferred to Hospital for the rest of her recovery after over one month.

There she gained consciousness, underwent further MRI scans and was later discharged after over a month. She could not walk by self for next six months and would hardly talk to anyone for the next one year. Physically she had recovered well until on 26th May 2016 where she had multiple seizures and was admitted for 2days in Then on 27th September 2016 she had another episode with multiple seizures and was admitted for one night in

The client lives in a joint family with her husband, her in-laws and her husband’s grandfather. She has a 3 year old son. Her family is supportive to her illness, especially her husband. Her mother-in-law takes care of the family relieving her of the burden. being highly educated decided not to take a distant job, instead balanced between home and wife’s profession to support her.

The client was born with a full term normal delivery with . The developmental milestones were also achieved on time. She has led a very healthy life and had no major illness or injury in the past. She has always been good in studies and a rank holder in her school. She was very peaceful and soft spoken. She is happily married with a 3 year old son and had not faced any marital or family issues. Since 2007 she has been working as a . teacher, teaching 12th standard students. has been very punctual and efficient; she would never take a day off and had a cordial relationship with her colleagues. She has always been a perfectionist and was good at striking a balance between personal and professional life.

Activity: She had increased psychomotor activity and was restless.

Speech: Her speech was comprehensible and spontaneous. Excessive talkativeness and pressure of speech was observed

Mood and Affect: Subjectively the mood was reported to be normal. Verbatim: “ ”

Objective mood: It was observed to be . The mood was appropriate to the situation and was congruent to thought.

Orientation: Patient was not oriented to time, place and person.
Attention: Attention was not easily sustained
Memory: Immediate, Recent and remote were found to be impaired.
General Information: General intelligence was found to be below average.
Abstract Thinking: Abstraction ability was found to be at conceptual level based on the tests of similarities and differences.
Judgment: Personal, test and social judgment was intact as the client showed to comprehend, plan ahead and make decisions about the situations presented to her.

Insight: It was present at Grade I (Complete denial). She said – “I am not sick, nothing is wrong with me”.

Reason for Psychological assessment- To test whether the client has some impairment in her Neuro-cognitive functioning.

The critical level on the basis of age of the client and her educational qualifications is 49.19. Significant elevations are considered = 3 Scores from the critical level.

The scores have been found to be indicative of inability to perceive tonal qualities and their . Inability to identify and understand different levels of coetaneous sensations or to generate sounds from the letters heard and integration of letters and auditory analysis has been found. Client has shown difficulty to name and identify objects visually in space.

is unable to understand receptive speech from simple phonemic analyses to complex sentences and finds it difficult to repeat words, and generate complex speech. Inability to analyze words phonetically and copy words, write sounds, words and phrases. Impaired intellectual functioning level was found with inability to compensate and use intact areas of brain to find alternate ways of doing the task and compensation impairment.

Ability to copy letters and words as well as write it from dictation is impaired. Client is unable to solve arithmetic calculations. There is inability to recall words visually and orally (short term memory) and to memorize verbal and visual information and integration of visual memory with motor skills. Inability to verbally describe, define and analyze information or to formulate and solve difficult verbal arithmetic problems has been found in addition with impairment of simple arithmetic skills.

It shows the client’s inability to comprehend both a relationship expressed verbally and then to use this relationship to understand some circumstance or carry out some behavior, inability to solve arithmetic calculations, involves recalling a list of words presented visually and orally which requires short term memory. The client also has an inability in repeating stories and words associated with pictures, interpreting and verbally describing pictures, analyzing stories, defining words, formulating and solving relatively difficult verbal arithmetic problems. The results are associated with poor emotional control, insight and understanding, indicative of poor understanding of non-verbal cues.

According to chief-complaints, history of present illness, mental status examination and test findings, the client has diffused impairment in fronto-parietal and temporal lobes.